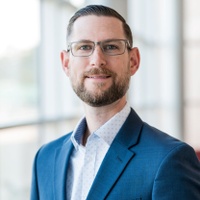 Caleb has been working as a financial advisor since 2012. He values forward-thinking strategies and philosophies. He believes financial control is not a fixation on money, but rather a freedom from it. With this mindset, he is able to bring a fresh and powerful approach to financial planning.

In his eight years of experience, he has earned various credentials including the Series 7 and Series 66 along with Life, Health, Disability, Annuity and Long-Term Care licenses. He began his journey into financial planning through Illinois State University, earning his Bachelor’s of Science in finance with a minor in financial planning in 2012. After graduation, he began working with IPI. Through this company, he found a mentor, Tom Ealy, and began working directly with him in his office in 2014. In 2016, Caleb became a Partner with John Foley, and together, they began the transition process to begin their own firm, LifeWise Wealth Advisors. The transition has helped them grow their team and their ability to provide excellent services to their existing clients as well as add new clients to the LifeWise family.

When Caleb is not at the office, you can usually find him in his garage tinkering with his cars or playing any number of different sports. Caleb got married to his wife Megan in November of 2018. You can often find them spending time together outdoors with their dog, Niko. They also enjoy traveling and exploring new places.